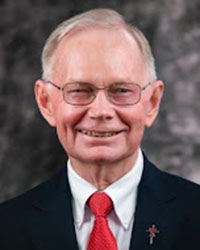 The Missionaries of the Precious Blood are pleased to announce the 65th anniversary of the profession of Brother Jerome Schulte, C.PP.S.

Brother Jerome, a native of Kalida, Ohio, entered the Missionaries of the Precious Blood in 1951 at Brunnerdale, the Congregation’s former high school seminary near Canton, Ohio. He was professed a brother on Aug. 15, 1955.

After his profession, Brother Jerome worked on the farm at St. Charles Center, then a seminary, in Carthagena, Ohio, and at St. Mary Novitiate in Burkettsville, Ohio. In 1962, he was assigned to Brunnerdale Seminary in Canton, Ohio, where he worked on the farm. While there, he was very involved with the Cursillo movement. He remained there until the seminary was closed in 1988, then served as a missionary in Peru.

On his return from Peru, Brother Jerome became a hospital chaplain, first in Canton then in East Chicago, Ind. In 1998, he was named director of initial formation and resided with those studying for religious life. From 2009-2018, Brother Jerome served as senior pastoral associate at St. John the Baptist Church in Glandorf, Ohio.

He now lives in retirement at St. Charles Center and is part of the Missionaries’ ministry of prayer.