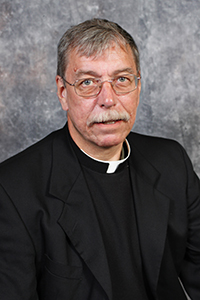 The Missionaries of the Precious Blood are pleased to announce the 40th anniversary of the ordination of Fr. Donald Davison, C.PP.S.

Fr. Davison, a native of Yoder, Ind., entered the Missionaries of the Precious Blood at Brunnerdale, the Congregation’s former high school seminary near Canton, Ohio.  He was ordained on August 16, 1980.

After his ordination, Fr. Davison ministered at St. Mary Church in Garden City, Kan. In 1982, he was appointed as an instructor in the Core program at Saint Joseph’s College in Rensselaer, Ind. He pursued graduate studies at the University of Virginia from 1985-89, with a year residency in Nigeria. He served as parochial vicar at St. Charles Church in Bloomington, Ind., from 1995-2010.

In 2012, Fr. Davison was appointed pastor of St. Augustine Church in Rensselaer, a position he will hold until August when the Missionaries say goodbye to the parish, where they have served since 1888.