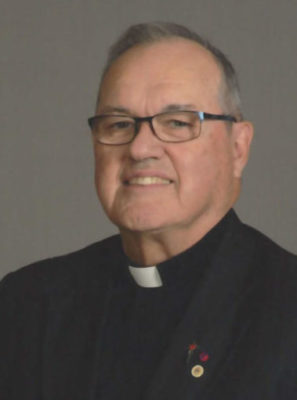 The Missionaries of the Precious Blood are pleased to announce the 50th anniversary of the ordination of Fr. Kenneth F. Pleiman, C.PP.S.

Fr. Pleiman, 77, a native of Sidney and McCartyville, Ohio, entered the Missionaries of the Precious Blood in 1956 at Brunnerdale, the Congregation’s former high school seminary near Canton, Ohio. He was ordained a priest on December 19, 1970, at St. Charles Center, Carthagena, Ohio. He graduated from the University of Dayton with a Degree in Philosophy and a master’s degree in theology.

Fr. Pleiman has been active in parish ministry and in leadership with the Missionaries of the Precious Blood during his life as a priest. He served at St. Anthony Church in Detroit as a deacon in 1969, then entered an intercity internship program at St. Bernard Church in Detroit and from 1975-81 served as pastor of that parish. From 1981-90, Fr. Pleiman served as parochial vicar and pastor of St. James the Less Church in Columbus.

He was elected provincial director of the Cincinnati Province of the Missionaries of the Precious Blood in 1990, and was re-elected to a second four-year term in 1994. In 1999, Fr. Pleiman became the pastor of St. Adalbert Church in Cleveland, and in 2010 moved to St. Augustine Church in Rensselaer, Ind., where he served as parish administrator for one year. In 2011, Fr. Pleiman became the parochial vicar of the Downtown Dayton Ohio Catholic Churches of Holy Trinity, St. Joseph and Emmanuel.

In 2018, Fr. Pleiman retired from full-time ministry. He continues to live in Dayton at St. Joseph Church and assists in parish ministry at the Downtown Dayton Catholic Churches.

“My 50 years of ministry, serving the Lord, has been blessed with family, Precious Blood members, parishioners and friends who have shared deeply the journey of life,” Fr. Pleiman said. “The joy of my priesthood has been inspiring, encouraging and moving people grow in their love of Jesus Christ, the Savior, as they participate prayerfully in the Mass and sacraments of the Church. Amazing and surprising blessing have filled these 50 years. Glory to the Blood of Jesus!”

Fr. Pleiman and other Missionaries celebrating a milestone anniversary are a great examples of faith and commitment, said Fr. Jeffrey Kirch, C.PP.S., provincial director. “We’re happy each year to honor our priests and brothers who have dedicated their lives to serving the people of God,” Fr. Kirch said. “Their many ministries inspire us and encourage us to do our best work for God’s kingdom. May God bless them for their faithfulness.”