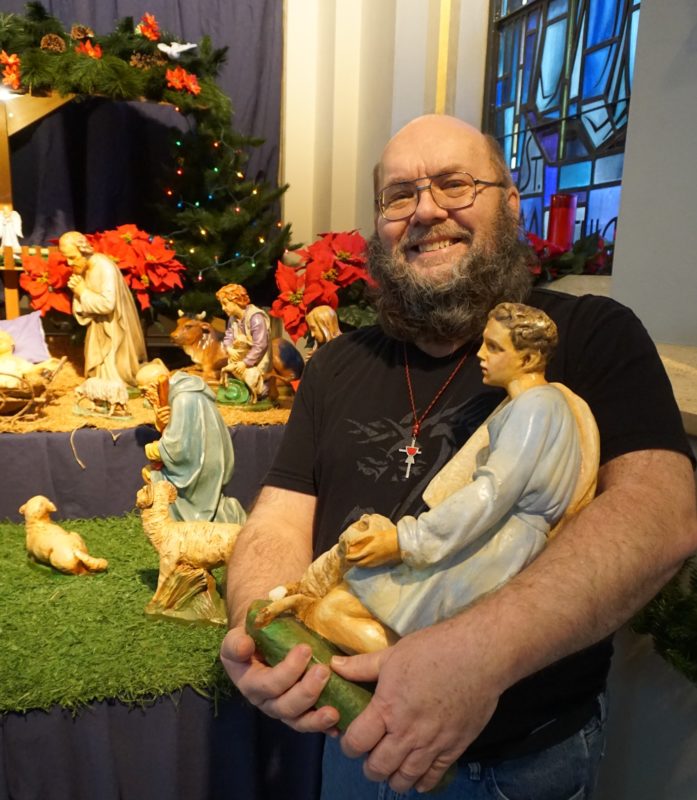 For well over 100 years, the same nativity figurines have taken their place in Assumption Chapel at St. Charles Center. Joseph and Mary, the shepherds, sheep, donkeys and angels, all gazing adoringly at the Christ Child, who is propped up on small handmade pillows so all can see him. (Please note that the Christ Child was placed in the manger in advance so that we could take the photos, then was promptly removed until Christmas!)

Some of the figurines possibly date back to the early 1900s. Assumption Chapel was built in 1906 at St. Charles, the Missionaries’ motherhouse. The province’s archivist, Fr. David Hoying, C.PP.S., theorizes that the figures are not all from the same set, based on their appearance—but they’re together now.

Many hands have moved the figures into place. Now the task falls to Br. Tim Cahill, C.PP.S., St. Charles sacristan, assisted by Mike Hemmelgarn, maintenance manager. They begin on the Monday after the Third Sunday of Advent. In comes the wooden substructure that extends the surface area of the side altar to allow enough room for all the figures. Those wooden support pieces are decades old; it is believed they were built by religious brothers at St. Charles who were skilled in carpentry.

Behind them hangs dark fabric representing the night sky. On top of them is draped artificial grass. Then the figures, some as tall as 21 inches, are put in place. There’s a tried-and-true way to go about the set-up, perfected during the long service of the previous sacristan, Br. Theophane Woodall, C.PP.S. It was Br. Theophane’s godson, Jared, and Jared’s little brother, who sewed the cushions for the Christ Child, back when they were Cub Scouts. St. Charles’ nativity scene is the result of the work of many people over the years.

This year, Br. Tim and Mike accomplished the set-up in about an hour and a half. That does not include putting up the decorations in other areas of the chapel, which are completed as Christmas gets closer. Normally, St. Charles welcomes everyone to the Advent and Christmas liturgies in its Assumption Chapel. Because of COVID-19, its chapels are closed to the public. This is a way of sharing Christmas greetings from St. Charles to all.

Setting it up is a labor of love, said Br. Tim. “I enjoy setting up the manger scene, and the fact that I’m doing it here at our motherhouse makes it that much more meaningful,” he said.

To see nativity scenes in chapels in Guatemala where Missionaries are in ministry, click here.