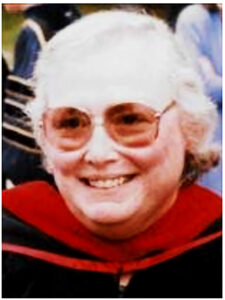 Geraldine “Gerry” Downs was born the fourth of five children in Buffalo, N.Y., in 1937 to a family of modest means. After attending Catholic schools from grammar school through high school, she trained and worked as a surgical tech. Gerry married Charley Stephanski, a Navy seaman. For 17 years, she moved around the country as a Navy wife, becoming the mother of four children: Chuck, Teresa, Michael and Annie. Later, she became grandmother to eight treasured grandchildren. The family’s last Navy post was in the San Francisco Bay Area. The changed circumstances of Charley’s retirement proved too much for Gerry and Charley’s marriage to survive.

Like so many other parents with teenagers, Gerry found herself stepping up to meet the needs of youth ministry. At St. Leander Parish in San Leandro,Calif., Gerry met a number of people who would be significant partners on her journey, including Jeffrey Keyes, director of liturgy and music. In the early 1980s, both of them travelled to Rensselaer, Ind., to study in the Summer Program of Church Music and Liturgy at Saint Joseph’s College, which was directed by Fr. Lawrence Heiman, C.PP.S.

A lifelong learner, Gerry enrolled in the master of theological studies program at the Franciscan School of Theology in Berkeley. At the time, this program accepted students with solid experience who had not completed a bachelor’s degree. Gerry received her MTS in 1990. While she was a student there, she got to know Fr. Greg Comella, C.PP.S., the director of the Precious Blood Formation House in South Berkeley, and Precious Blood candidates who were studying at the Franciscan School. Among the latter was Jeffrey Keyes, who was incorporated as a Missionary of the Precious Blood in May 1990 and ordained a priest in September 1991.

In the early 1990s, Gerry was a member of the pastoral team at St. Augustine Parish in Oakland. As a pastoral associate, Gerry was director of the RCIA program and a regular preacher at Sunday liturgies.

When the Province of the Pacific began a Companions program, under the direction of Fr. Keyes, Gerry eagerly took part. The first Companion covenants were made in May 1993.

In fall of 1992, the Precious Blood Formation House was re-dedicated as Sonnino Mission House with Frs. Comella and Keyes in residence. Fr. Jim Franck, C.PP.S., the provincial director, was also a member of the Sonnino team. In 1994, Gerry and another Companion, Maureen Lahiff , became members of the Sonnino team. Among the ministries that Maureen and Gerry developed at Sonnino were workshops and support groups for those seeking annulments.

Gerry’s ministry of the Word grew and developed as she became a preacher for Isaiah Ministries, which offered parish missions led by joint teams of clergy and laity. Gerry began
studies for a doctor of ministry degree with the Graduate Theological Foundation in Indiana, which provides distance-learning opportunities. Gerry’s doctoral work led to her book on preaching by women, Reflecting the Face of God.

Gerry collaborated with Fr. Dennis Chriszt, C.PP.S., in the development of Precious Blood Parish Missions. Their preaching teams usually consisted of a priest, a Precious Blood sister (CPPS or ASC) and a lay associate.

Gerry moved to Sonoma, Calif., in the 1990s and became an active volunteer at St. Leo Parish. Her presence and spirituality inspired members of the parish community to say, in effect, “We want what you have!” Along with parishioners from St. Raphael in San Rafael, who worked with Fr. Dave Matz, C.PP.S., they came together under Gerry’s leadership to found a new Companion group, the first initiated by a Companion.

Gerry died in October 2016 of pancreatic cancer, just shy of her 80th birthday. Her life as sister, mother, grandmother, liturgy and RCIA director, preacher and writer clearly reflects her faithfulness and spiritual growth. Inspired by Precious Blood spirituality, she preached by word and example.

(Maureen Lahiff is the convener of the Companions group in Alameda, Calif.)