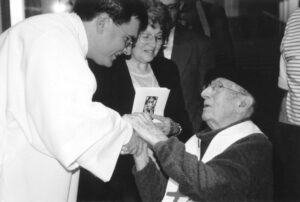 Fr. Diller offers words of wisdom in 2002 to
newly ordained Deacon Tim Knepper. “He helped me greatly through my formation—he has a special place in my heart,”
Fr. Knepper said.

I remember him as one of the most caring people I have ever known. Regardless of who you were, the color of your skin, or your status in this life, he treated people as though they were special, simply because they were created in God’s image. In 1976, when
many would be considering retirement, he decided to join his priest brother, Fr. Otto Diller, C.PP.S., who was disabled with
rheumatoid arthritis and was serving as chaplain at Lourdes Hospital in Paducah, Ky. You might say Fr. Harold then began his second career. He and Fr. Otto joined forces to provide ministry to the sick and dying as chaplains at Lourdes Hospital.

They became known as the “Diller Boys” and spread God’s love throughout Paducah, where Catholics were a small minority. During that time, Fr. Harold also served as pastor at Rosary Chapel for eight years. When Fr. Otto died in 1981, Fr. Harold remained in Paducah until failing eyesight forced his retirement to St. Charles Center.

Neil and Patricia Diller are Companions with the group in Carthagena, Ohio.