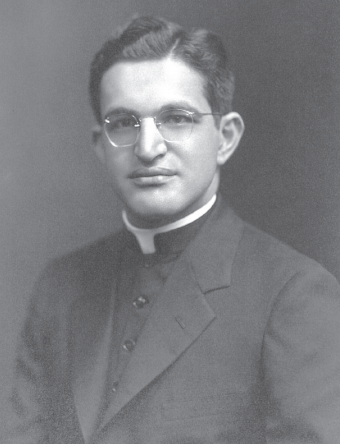 Fr. Sam Homsey, C.PP.S., was born and raised in St. Joseph, Mo., in a Lebanese-Arab Catholic family. He learned family dedication and work early in his life and allowed God to speak to him. He became a man of faith, courage, and hope.

His dad was a fruit and vegetable vendor in St. Joseph, and Sam took on the task of helping his family early in his life. He grew up in a community where Arab Catholics deeply valued their faith in an environment where their tradition and culture were sometimes not appreciated by the larger community. Faith planted itself early in Sam’s heart. He began to ponder the possibility of priesthood and spoke to C.PP.S. members who ministered in St. Francis Xavier Parish. Sam went to Brunnerdale, the Missionaries’ high school seminary outside of Canton, Ohio, and on to St. Charles Seminary in Carthagena, Ohio, for his continuing education and formation.

He often shared how he felt he had to prove himself continuously because he was made fun of by the larger student community because he was of Arab descent. He said that even some of the incorporated members would say hurtful things to him because he wasn’t German. He took it all in stride, however.

He was ordained and ministered in various parish communities. He lived among black people in a parish in Nashville and learned to appreciate the wonderful friendship they extended to him. He would strongly defend the dignity of African Americans when in the presence of whites who said ugly things.

Sam worked in Chile for years and learned that mercy and a pastoral approach were infinitely more important than Church laws and rubrics and regulations when dealing with real people. He learned to accept people as people. He once shared that he, being the pastor of a parish in Santiago, realized that he and his assistants could not offer Mass often enough to serve all 50,000 Catholics in the parish, and stopped worrying about whether or not they were missing Mass. He learned he was simply called to serve God’s people and let God do the saving. His ideas about God and grace changed and he began more and more to experience God’s mercy and compassion in his ministry.

Sam served the German-Russian people of North Dakota for several years and then moved to Texas, where he ministered in the West Texas town of Fort Stockton. His example and influence helped many Anglo people begin to change their attitudes towards Mexican-American people and immigrants from Mexico. Sam treated all people with dignity and respect.

Sam became a member of the Rotary Club and met many people from the larger community. He became a greatly respected speaker, witnessing to the truth in the name of justice, peace, hope and acceptance because of his faith in Jesus Christ and the Gospel. He emphasized the dignity of women, and taught men that it was wrong to strike their wives or any woman. There were some marriages that were preserved because of Sam’s wisdom from the Gospel. Decades have passed since Sam left Fort Stockton, but people still remember him and speak of his having been a profound influence for good in their daily lives.

(Fr. Mike Goode is the archivist for the Kansas City Province. He has ministered in Texas and Missouri.)