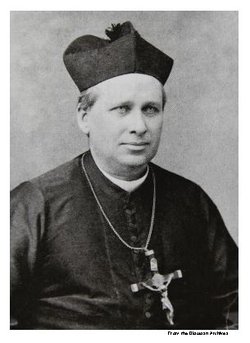 Fr. Patrick Hennebery, C.PP.S., born in Ireland 1830, was part of the great potato famine exodus to the United States. He entered the Congregation (from Wisconsin) in 1848 and was ordained 1853. It is surprising that he would come to a German Community like Brunner’s at all, especially if one considers the fights that characterized German–Irish relations in the Church almost everywhere in those days. Hennebery was a zealous, religious person, and presumably was attracted by his admiration for Brunner. He was of great value to the C.PP.S., if only for the reason that he was a native English speaker. Brunner employed him as his secretary for some time.

But with Brunner’s death in 1859, things became difficult. At first, Hennebery remained connected with one or the other convents in Ohio, and he distinguished himself by serving the English-speaking communities in the area, especially the Irish. He also had some success in ministry with the Black population in Mercer County. But there is evidence that he did not really fit into a “German” congregation. Hennebery also complained about the ties with the sisters, and he was unhappy that the priests were involved more and more exclusively in parochial work, and that among Germans only, instead of stressing popular missions as Gaspar had done.

In 1865, he was suddenly “sent” (under peculiar arrangements) to California, and by 1869 he had made such a good impression that he was invited by the bishop to organize a house in Eureka.

By this time, the Ohio “provincial” (the C.PP.S. in the U.S. at the time was not technically a true province) had shown some coolness to the project, and so Hennebery got support from the C.PP.S. in Italy. California was declared a separate province (1869-1874), and Fr. Andrew Kunkler, C.PP.S., the provincial director, was compelled to send help in the form of two priests, two or three brothers and two students from Ohio.

That same year, Fr. Hennebery began building a college (St. Joseph’s College) on a hill near Rohnerville, a mining district. This was the largest building project undertaken by the C.PP.S. up to that time. The college was intended to be a financial support to the Congregation, but it proved to be just the opposite. By 1874, it was in deep financial trouble. The area suffered a sudden serious recession, and the interest he had to pay on borrowed money was backbreaking.

Furthermore, his relationship with the bishop soured, and even more, he had troubles with the men sent to help him. The men from Ohio deserted him, and he eventually got two Italian priests who apparently were of little help. As a consequence, in 1874 Rome compelled the Ohio “province” to assume the debts, and the province was closed.

At this juncture Fr. Hennebery seems to have made an agreement with the Ohio C.PP.S. members to reimburse them by going on a world mission tour, which lasted from 18771884. This mission odyssey took him to Australia, New Zealand, Tasmania, South Africa and India. The mission tour reminds us how widely the Irish had scattered to all parts of the globe in the 1840s.

Fr. Hennebery had a marvelous gift of appeal to these people, for the Church had scarcely been able to keep up with these migrating Irish. Simultaneously, Fr. Hennebery was a vigorous temperance preacher, possibly the greatest among Catholics in the U.S. at the time, and in this respect received a favorable press even among the Protestants. At the same time his missions paid off handsomely, possibly netting up to $9,000 in a single year, a huge amount for that time. In 1884, Fr. Hennebery arrived in Rome, became a member of the Italian province, and was commissioned by them to start a house in England. However, conditions proved unfavorable.

By 1886 he had returned to America, and at this juncture his relations with the Ohio C.PP.S. worsened even further. He discovered that the Ohio members had deliberately allowed his California project to deteriorate (the college closed in 1877), and even worse, they quarreled over the money he owed the Congregation. Fr. Hennebery re-opened the college (contrary to his promises), got two brothers from Rome (the Schaepers, who were born in the United States but belong to the Italian Province) to help him, but they did not work out either, and the college was closed again in 1895.

Fr. Hennebery was undoubtedly a gifted preacher and quite possibly motivated his student, Fr. Godfrey Schlachter, C.PP.S. (a highly lauded preacher in our Congregation), and thereby possibly was an inspiration and model for the C.PP.S. mission band later on (until its demise in the 1960s). It seems that at the time Fr. Hennebery was almost all alone among C.PP.S. mission preachers in America.

Patrick Hennebery was undoubtedly one of the outstanding C.PP.S. Missionaries of the 19th century, but his community skills evidently did not match his skills in the pulpit. Despite that, we can still honor this man who was devoted, as was St. Gaspar, to preaching God’s word.

This article was adapted from the late Fr. Dominic Gerlach’s Interpretative History of the American Province C.PP.S. 1838-1965, published in 1994.