The Kingdom of God is a Joyful Place

Fr. Larry Eiting, C.PP.S., was born in Minster, Ohio, on January 12, 1941, one of five children. He began his studies with the Missionaries of the Precious Blood at Brunnerdale High School Seminary and continued at Saint Joseph’s College and St. Charles Seminary. He was definitively incorporated in 1965 and ordained to the priesthood in 1968.

After serving as an associate pastor in Dayton for two years, he began a 25-year missionary ministry in Chile. His ministry posts included parishes in Rio Negro and Santiago.

In 1984 he was elected vicariate director and remained in that office until his death in 1990. In 1986, he became principal of Saint Gaspar College in Santiago. When he was pastor at San José de Garin Parish in Santiago in the early 1980s, he faced persecution from the dictatorial government of Augusto Pinochet as a result of defending and supporting people who were suffering human rights abuses. His visa was cancelled, and it was only through the efforts of Cardinal Silva and Chilean Church authorities that he was able to remain in the country. However, the condition was that for over a year, he had to renew his visa each month with all the paperwork involved in that.

As I began my studies for the priesthood in the late seventies, we were discussing why I wanted to become a priest. With his usual good sense of humor, he told me that his vocation was sparked by the swimming pool at Brunnerdale Seminary. At age 14, that was very appealing to him! In an ironic twist of fate, he was called to the Eternal Father by means of a swimming pool.

Larry was a fun person to live with, and he always had a big smile on his face. He would say that there was a time for the kingdom of God to be joyful, and his smile was a charmer. He would probably love to see how we still share a few of his anecdotes about missionary life in Chile.

An insight into his commitment to the Lord, to the Church, and to the Missionaries of the Precious Blood can be seen in the last homily he gave on the feast of St. Gaspar, October 21, 1990, the day before his untimely death.

The words of that homily ring as true today as they did 30 years ago: 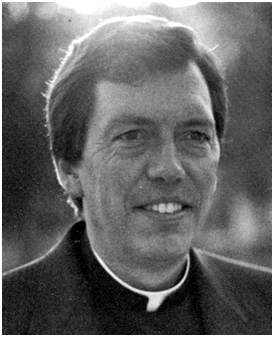 “I hope that this celebration is for us a manifestation of our desire to correct our errors and, with the grace of God, to experience a sincere conversion. I pray the Lord will help us to have a better understanding of our identity and to be a community more united and more faithful to its mission and to the charism of our founder. And by means of a contemplative life and a persistent prayer, we grow in our faith, discover our prophetic mission, and respond to our Church, who calls us to conversion and renewal… Help us, Lord, to be your Missionary Church, which knows how to meditate, adoring and loving your Word, so that we may transform it into life and communicate it to all of our brothers and sisters.

(Fr. Antonio Baus, a member of the Latin American Province, is the pastor of St. James the Less Church in Columbus.)