May Our Stomachs Turn Over

One of my bible professors in the New Testament was beyond incredible in his knowledge and wisdom in his study of the gospel of Matthew. My advisor relayed a story he heard that the bible professor had been forced to memorize Matthew in the original Greek forwards and backwards in his doctoral studies in Europe years ago. My skills in biblical Hebrew and biblical Greek are weaker than my curveball in baseball, and it must be noted I played only the bare minimum of two innings in left field and one at-bat required by Little League rules when my dad coached me. So naturally, anytime my professor spoke with gusto about a particular word or phrase in biblical Greek, my ears perked up, and I remembered to write it down.

This weekend’s Gospel isn’t Matthew, but it does have the lone verb my professor taught me from the original Greek: moved with pity for them. The translation is so bad (biblical scholars’ words, not mine). The literal Greek meaning centuries ago conjured up images of intestines turning over, something like his stomach literally turned over. It’s the same verb when the dad in the Prodigal Son parable finally sees his son over the ridge and the Samaritan who cares for the wounded man in the Good Samaritan parable. Jesus’s stomach overturns from this feeling today at the sight of the crowd. This weekend brings us days away from the ninth anniversary of the shooting at the Century 16 movie theater in Aurora, Colo., at the premier of The Dark Knight Rises, one of the last times I felt that stomach churning after the epidemic of mass shootings intersected with what had been my plans to see a premier of the movie.

The image of leadership from the readings this weekend harken us to the reign of David, a sprite of a boy when anointed king himself. References to shepherds in the New Testament inevitably conjure images of David, Solomon and the few good kings elsewhere in the lineage of leadership of Israel. For those of us far removed from herding and raising sheep, this is kind of a soft and cuddly image. Stuffed animals of lambs make for a great addition to First Reconciliation for parishes sometimes (a great practice started or, at least continued, by Mary Schmitmeyer at St. Francis Church). However, the disadvantage of social media, especially videos, is the ability to see ovine work in the natural habitat. One of the viral videos lately showed a shepherd pulling a sheep out of a ditch it fell into, only for the sheep to jump right back into the same ditch 30 seconds later. Sheep aren’t quite Ivy League material.

The image of sheep and shepherds surfaces the incompetence of sheep, but it also surfaces Jeremiah’s words: they need no longer fear and tremble; none shall be missing; the righteous shoot to David shall reign and govern wisely, shall do what is just and right; the Lord our justice. The leading of our God in this shepherd is one who brings near those who were once far off—not an order for those who are far off to do the right thing to be allowed to be brought near, not an instruction to follow the right teachings to be allowed to be brought near. Rather, God reconciles all things in this cross and this person Jesus, who is “moved with pity” (overturned stomach at the overwhelming feeling) at seeing the crowd—all of the crowd. The offer of grace, reconciliation and peace from this Good Shepherd is not based on what we do to deserve it but what God does to offer it to us. It’s not what we do; it’s what God has done and continues to do.

May our hearts (and intestines) be moved to the same compassion Jesus was moved with, that God’s peace and justice may be fully present in our world. May those who are far off from this peace by senseless violence and hatred, especially the multitude of victims of gun violence, be brought near to God’s reign of peace and justice. 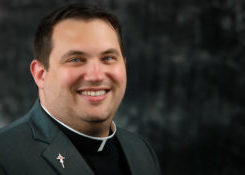 Fr. James Smith, C.PP.S., is a student at Graduate Theological Union pursuing studies in pastoral and practical theology. A 2009 graduate of Saint Joseph’s College, Fr. James was ordained in 2017. He resides at the C.PP.S. Sonnino Mission House in Berkeley, Calif.