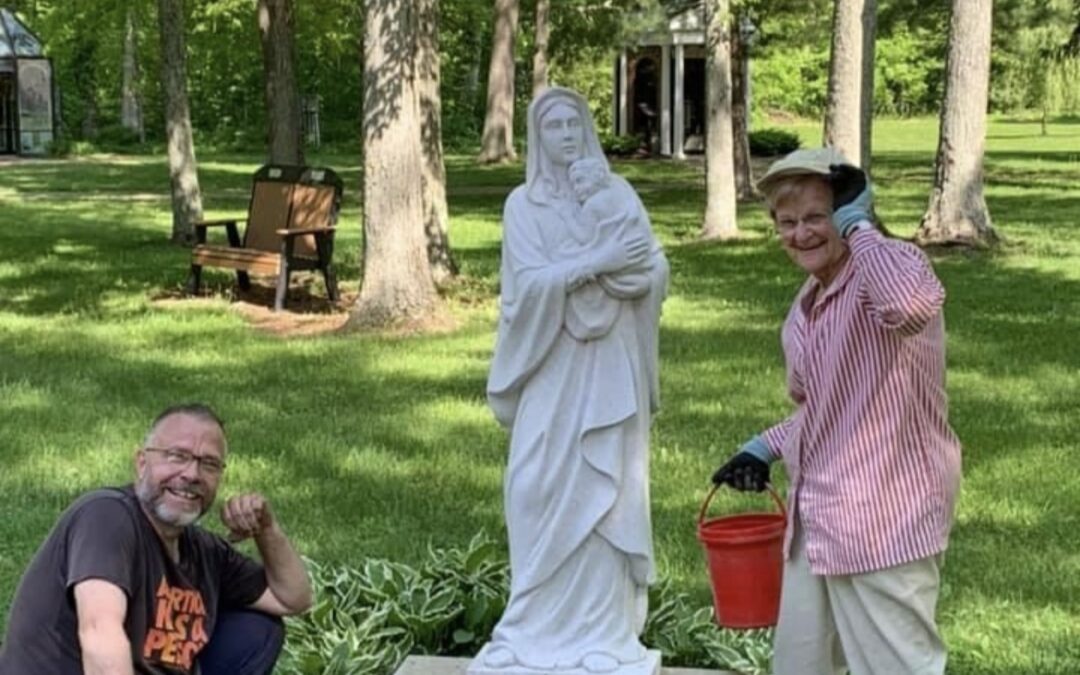 This is the seventh year that our master gardeners, Joan Hudak and Glen Verhoff, have been driving from Port Clinton, Ohio, a 45-minute round trip, to spend hours tackling projects one at a time here at our lovely Sorrowful Mother Shrine.

It all began for Joan when she was a teenager and her parents would bring her on a pilgrimage. She remembers the huge flowering urns as one drives down the long entrance road. She then would visit with her husband and has purchased several memorial stones for the Memorial Walkway.

One summer more than 10 years ago, Glen started attending weekday Masses. During that summer, the Shrine chapel was his home away from home. He would spend quiet time journaling near the large crucifix in the back plaza.

When Glen’s father died, he put a daylily garden at the shrine in his memory. This got his hands in the shrine soil and soon his good friend, Joan (whom he knew from his teaching and from parish music ministry), hopped aboard helping him with this project. Later, they constructed a daylily bed in honor of Glen’s deceased mother. With Glen’s help, Joan designed and implemented a Good Shepherd garden in honor of her parents.

Soon they were completing projects one at a time. They would see a grotto or shine and brainstorm on how they could spruce it up. In addition to pulling weeds, they created a way to define spaces, adding seating areas, and selecting many varieties of suitable flowers, ferns, shrubs and trees. Next came cleaning and hauling stone, street bricks, pavers and metal fencing all of which were retrieved from hidden stockpiles in the back wooded area of the Shrine.

Together, all of these elements gave a presence to each individual shrine. Their goal was to help the pilgrims not only to explore the beautiful grounds, but also to pause throughout and pray. Realizing that this is holy ground, they want to help make this a place of peace, prayer and grace, helping to bring all closer to our Lord, Mary, the Saints and the Church. As we know, God speaks to our hearts through truth, goodness and beauty.

(Maureen McDonnell is a resident and volunteer at the Sorrowful Mother Shrine.)