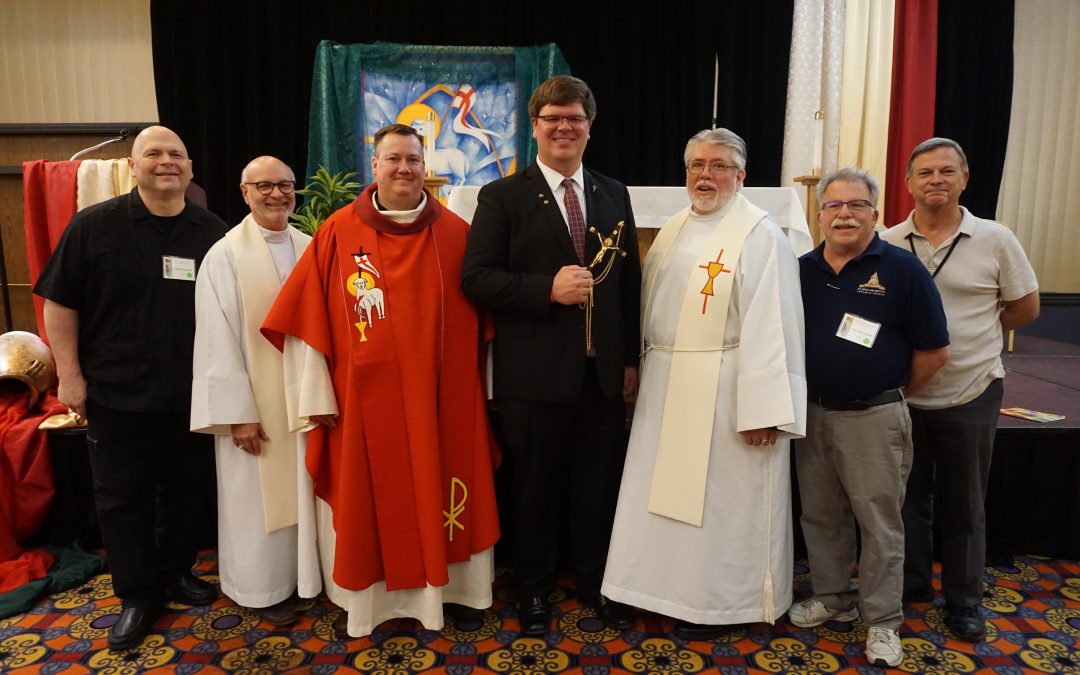 Gregory Evers, C.PP.S., was definitively incorporated as a Missionary of the Precious Blood today during the Missionaries’ assembly in Indianapolis.

Greg, who will be ordained a deacon in August, grew up in Maria Stein, Ohio, in a parish served by the Missionaries. “I was attracted to the Congregation because of the relationships I had with the members first before I knew anything about the Community’s charism or spirituality. The members are very down-to-earth, approachable people. After some time getting to know the members, I could begin to see myself as one of them,” he said.

Greg’s family members—his parents, Roger and Mary, his siblings and grandmother–were present to support him as he made his lifetime commitment to the Congregation.

Fr. Emanuele Lupi, C.PP.S., the moderator general of the worldwide congregation, accepted Greg’s commitment to the Missionaries as he presided at the evening Mass. “Greg will be one of us, together with us in this ministry, in this life,” Fr. Lupi said. “Let us say thank you to Greg for his vocation, for his decision to spend the rest of his life with us.”

Greg was presented with the mission cross of the late Fr. Gene Schnipke, C.PP.S., who died unexpectedly in March. Fr. Ken Schnipke, C.PP.S., gave the mission cross to Greg and also was the homilist at the Mass. “When Greg first started discerning religious life, my brother, Fr. Gene, was one of the first members to meet with him,” Fr. Ken said. “Gene also brought Greg into contact with other Missionaries so he could get to know the Community. Gene’s willingness to share stories about his life as a priest and a Missionary of the Precious Blood gave Greg a sense of his own vocation.”

Near the end of the Mass, the 2022 jubilarians were called forward to be honored. Fr. Lupi noted that the Decree of Incorporation that Greg had signed during Mass was on the altar alongside the blessing for the jubilarians. Fr. Lupi told Greg to look at the jubilarians for the inspiration that their faithfulness to their calling can provide. He told the jubilarians to look at Greg and remember what it was like to be a new member of the C.PP.S.

In the morning and afternoon sessions, Sr. Maria Hughes, ASC, led discussions about the future United States Province, which will be formed during Morning Prayer on Wednesday. She led a presentation from the provincial directors of the Cincinnati and Kansas City Provinces, Fr. Jeff Kirch, C.PP.S., and Fr. Garry Richmeier, C.PP.S., about life in leadership.

“What Jesus’ ministry was, was building relationships, particularly with those who were cut off, pushed aside: the lepers, the prostitutes, the tax collectors,” said Fr. Kirch. “As leaders, building relationships is so important because it really gets to the heart of who we are, not just as Missionaries of the Precious Blood, but as Christians.”

“We recognize all those different bonds that we have: with our lay associates, with the sisters’ congregations, with our partners in mission, with staff at ministry sites,” he continued. “We foster all those different relationships. .  . As a new province, as we are continually called to conversion of our lives and ministries, we will build those bonds so that our charism continues to spread in other ways, through the Missionaries, through the relationships we are building.”

In a presentation entitled “New Wine In New Wineskins,” Frs. Joe Nassal, C.PP.S., and David Kelly, C.PP.S., shared their thoughts about the future of the new province. Fr. Kelly, celebrating the 40th anniversary of his ordination this year, said that when he is in meetings, “I find myself often being the oldest person in the group. There’s an advantage to that. I know that I don’t have that much more time; we have to get to the core issues. I can’t wait for good things maybe to happen.

“If not now, what are we waiting for? The cry of the Blood is loud, on the front pages. If we’re waiting around, for who or for what? I really feel there is an urgency for the spirituality we embrace. But we can’t keep it locked in small rooms – it has to go out on the highways and byways and be spread among the people.”

And so, he told the Missionaries and Companions, “Be provocative and take risks.”

Tomorrow at the assembly, the new United States Province will be created during Morning Prayer. Elections will begin for the leadership of the new province.

Please pray for the Missionaries of the Precious Blood this week as they step into their future in faith.