Lazarus’ Name Points to His Humanity 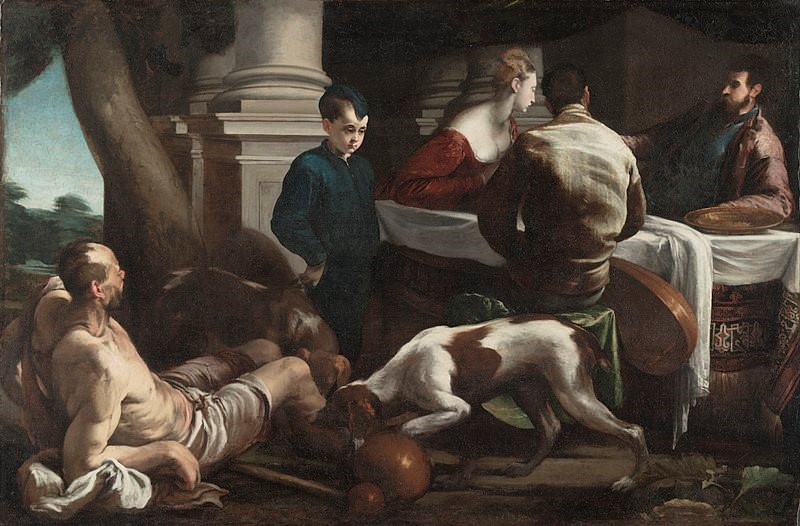 Lazarus and the Rich Man by Jacopo Bassano

One of the things that I learned early on in Biblical studies was to pay attention to names as they appear in Biblical texts. It is particularly interesting in this story that the rich man is nameless, yet it is the poor man who is named. In Jesus’ mind, as the story teller, Lazarus was the important character and the rich man less so. This, of course, is sort of the reverse of what one might expect. In fact, centuries later we know of monastic copyists, probably the sons of wealthy families, who attempted to give the rich man the name Dives (Latin for rich).

The details make it clear: the rich man was rich. He was “dressed in purple garments and fine linen and dined sumptuously each day.” Every day was a feast in his life. Lazarus, on the other hand, wasn’t just poor. He was “covered with sores,” a sign of also being ritually unclean and he would have been content to eat “his fill of the scraps that fell from the rich man’s table.” The chasm between them in their earthly life was nearly as great as that which existed in the afterlife.

I don’t think this parable is meant to condemn the rich man for being rich. Jesus gives Lazarus a name and what seems to be highlighted is the lack of care the rich man had for him. The rich man knows Lazarus’ name when he needs something from him, but seems not to have cared about him in life.

He could have cared for him and helped him. Even the rich man’s old clothes and table scraps would have been more than enough for Lazarus. Care for the poor and those on the fringes of the community was a central theme of the Law and the Prophets. One which the rich man clearly ignored. But again I think the deeper lesson is not about wealth and poverty. It’s about their shared humanity

We might do well to go back to where I started this reflection, a name. The use of a name reminds us that Lazarus is a person, even if he is a fictional one. He’s not simply a placeholder in the story. So often we forget other’s humanity. Our atomized society allows us to lose sight of the personhood of the poor, or of everyone but those in our immediate circle. I’m not speaking only of those we normally identify as “the marginalized.”

When people are unnamed, it’s easier to keep them at arm’s length. They are more of an object than a person. It’s easier to hate an object than a person. But when we know their name, it’s harder to forget their humanity. They aren’t just a random homeless person. They are a human being. Their name reminds us that they also have a story and are beloved by God. They are a beloved brother or sister.

So I want to encourage us to look inwardly and ask “Who do I keep unnamed?” “Who do I prefer to keep as an object or a category?”