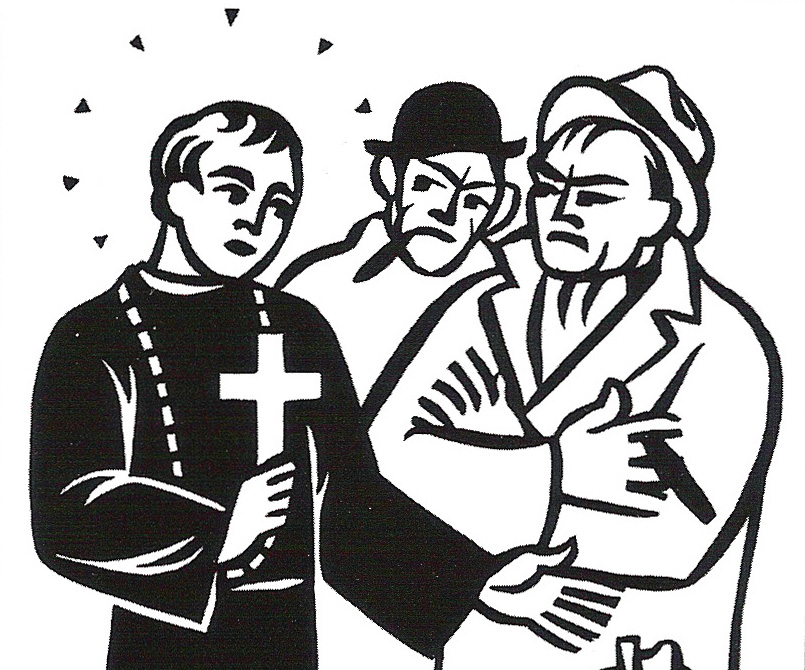 Missionaries of the Precious Blood were reminded that they carry a unique heritage, and that the people of Sonnino, Italy remember.

Fr. Dennis Chriszt, C.PP.S., was the homilist during a Mass celebrated on the Solemnity of St. Gaspar, October 21, at St. Charles Center in Carthagena, Ohio.

Fr. Chriszt said that 20 years ago, he had been sent to Italy to observe how Missionaries there conduct parish missions. He was in the town of Palestrina for three weeks, during which “we preached at least three times, once in the morning, once in the afternoon and once in the evening.”

One day he was walking around town looking for the Missionaries he was to meet, to accompany them on the home visits that were a part of the parish mission.

He was wearing a cassock and mission cross, searching for his confreres, when “a barber came out of his barber shop, stopped me, kissed the corpus on my mission cross then kissed my hands. He said, ‘Grazie, Grazie, figlio di San Gaspare!’

“Then he told me he had been born in Soninno and said that he would never forget.

A similar thing happened two more times that afternoon as I walked through the streets of Palestrina.”

They were remembering that St. Gaspar had saved the town of Soninno, which, after the French occupation of the Papal States, had been nearly overrun by former guerilla fighters who had turned to banditry to try to support their families.

Frustrated, the government had decreed that the bandits be wiped out and the town destroyed.

St. Gaspar, begging for clemancy, went to the cave where the bandits were hiding, stood in the mouth of the cave and preached a Gospel of salvation. The bandits repented, laid down their weapons, and the town was saved.

“I wish we knew exactly what St. Gaspar said that day,” Fr. Dennis said. “But I know this: in the waters of baptism, the Spirit of the living God fell upon us all. The Spirit of the Lord anointed us to bring glad tidings to the poor, to proclaim liberty to captives and recovery of sight to the blind.”