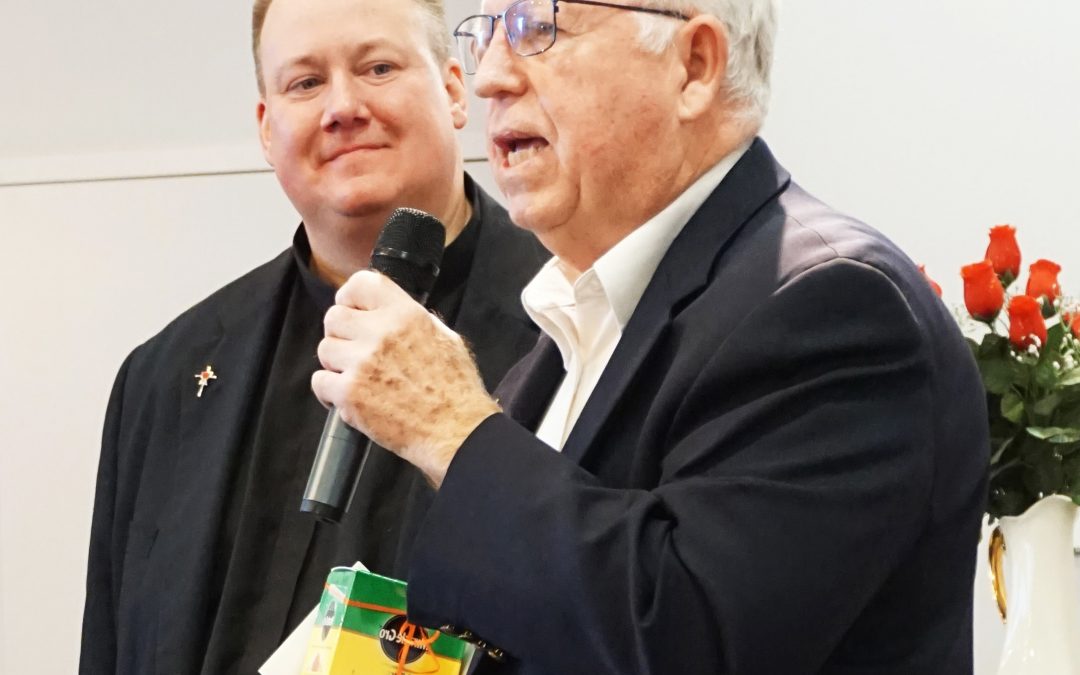 Br. Joseph Fisher, C.PP.S., was honored for his 35 years of service as treasurer of the former Cincinnati Province, during a dinner held in his honor at St. Charles Center in Carthagena, Ohio, on October 28.

“Br. Joe has done anything that’s needed for the United States Province, and before that, for the Cincinnati Province, for 35 years.”

During those years, Br. Joe lived out Fr. Kirch’s first impression of him. “The very first time I met Br. Joe Fisher, it was around 1997. I was a student at Saint Joseph’s College and I was attending a discernment retreat at Precious Blood Church in Dayton. We had an evening meal in the basement. Fr. Angelo Anthony was the vocations director and Fr. Ken Pleiman was the provincial, but at first I didn’t know them.

“After the meal, Fr. Ken and Br. Joe got up to do the dishes. By that time, I knew that they were the provincial director and the provincial treasurer. And I thought, ‘If they’re the ones doing the dishes, this sure is an interesting community.”

Quiet, conscientious and constant service is a theme in Br. Joe’s life. He was presented with a plaque that read, “With gratitude and appreciation for Brother Joseph Fisher, C.PP.S., who has used his talents to grow and safeguard the resources of our Congregation, and who has served Christ by serving his fellow Missionaries.”

Br. Joe, grew up on a farm near Wapakoneta, Ohio, and joined the Congregation at Brunnerdale. He was professed in 1977.

His work for the Congregation has stretched far beyond his well-organized office in Dayton. He served as a member of the provincial council and on its committees.

He was “instrumental in supporting the Latin American Province,” Fr. Kirch said, “and prior to that, he provided constant support for our missions and vicariate in Chile, Peru, Guatemala and Colombia. He has also served as an advisor to other religious communities.”

For 35 years, Br. Joe did his daily work while monitoring the vagaries of the financial markets, worrying with every dramatic downturn for the sake of the Community he loves.

“There have been good days” on the job, he told the guests at the dinner, “and some really good days, and some days when I’ve gone home thinking that I’d been as close to hell as I ever want to get.”

Further, he noted that the Dow was up 835 points on the day of the dinner.

He took on those worries for the sake of his confreres, said Fr. Jim Seibert, C.PP.S., who was his classmate at Brunnerdale.

“I always told people that I knew as long as Br. Joe is the treasurer of our Community, we don’t have to worry about anything. Br. Joe was going to take care of us, and he did it for all those years.”

Fr. Kirch concurred: “Br. Joe has done immense, immeasurable work for us and for the Church. And for that, we are eternally grateful.”