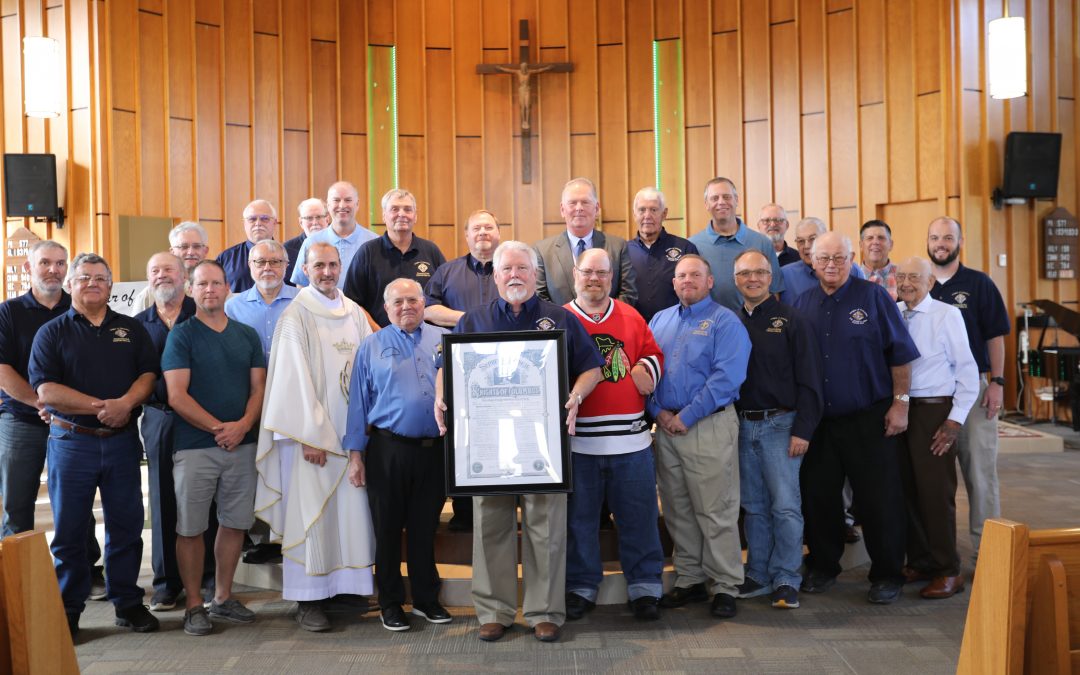 One of the first words that Bill Milani of St. Mary’s Parish in Centerville, Iowa, uses to describe the late Fr. Joe Miller, C.PP.S., is “evangelist.”

Ask Bill to explain that, and he’ll most likely point to himself. He describes himself as “kind of a lapsed Catholic” for many years, until Fr. Joe arrived on the scene.

“When Fr. Joe came to our parish, I started going back to church. And I’ve been going back steady ever since,” Bill said.

For his own personal reasons, and for many others, Bill was happy to spearhead the cause to rename and recharter the Knights of Columbus Council in Centerville the Fr. Joseph E. Miller, C.PP.S., Council 2144. Bill serves as the council’s Grand Knight.

K. of C. Councils often choose a council name that is significant to their faith and/or locale, and for Centerville, Bill said, there could be no better name: “Most of the people in our parish still remember him. He was a great man.”

Fr. Joe, a native of Bellevue, Ohio, was ordained in 1977 in Bellevue’s Immaculate Conception Church. A member of the former Kansas City Province, he served in many parishes, including 11 years in Centerville (1993-2004), as well as St. Francis Xavier in St. Joseph, Mo.; St. James, Liberty, Mo.; Immaculate Conception, Butternut, Wisc.; and Sacred Heart, Sedalia, Mo. He also served as the province’s vocations director.

When his friend Bill brought up the idea of renaming the K. of C. Council in his memory, no one was against it. “It took about 10 seconds for us to vote in favor of it,” he said.

Then came the paperwork. Helped by his friend Ed Pancrazio, who works for the Knights’ state council, the Knights in Centerville filed all the proper forms. First they had to get the approval of their bishop, then the state council. From there, the request went to the supreme council in Connecticut.

That’s where it bogged down. “Nobody argued with our proposal—it’s just a long process,” Bill said. It took about six months from start to finish, which doesn’t sound too bad as far as church administration goes, but the Knights in Centerville had a deadline: they were to celebrate their 100th anniversary as a council in 2022.

Bill tried to be patient. “I’m former military, so I know if you push too hard, sometimes your paperwork goes to the bottom of the pile,” he said.

In the end, the new charter was approved in time for the celebrations at St. Mary’s in Centerville, where Fr. Timothy Armbruster, C.PP.S., is now the pastor.

Honoring the memory of Fr. Joe has been gratifying for his friend Bill, who says he has too many Fr. Joe Miller stories to choose a favorite.

Fr. Joe drew people to Jesus in a quiet but compelling way.

“It was just him,” Bill said. “Never, in all the years that I knew him, did I ever know him to be angry about anything. He just took things in stride.”

As a veteran, Bill also appreciated Fr. Joe’s talents as a recruiter.

“One time he asked me, ‘Would you mind taking over cooking the meals at the parish’s Harvest Festival? It won’t take much of your time.’”

Bill said yes, and of course the effort snowballed to include all the Knights and their wives, and has been going on for nearly 30 years.

For those and many other reasons, Bill was glad to spearhead the efforts to rename the council for his friend. “Of all the honors we have, it was the best we could bestow on him,” Bill said.