Make Room for the Messiah

Today we celebrate the Epiphany of the Lord. We remember the three magi, Gaspar, Melchior and Balthazar. Our founder, St. Gaspar del Bufalo, was born on the feast of the Epiphany, January 6, and he was named after the three magi: Gaspar Melchior Balthazar del Bufalo. St. Gasper didn’t go on many long journeys in his life, but his soul and heart traversed the whole world.

St. Gasper lived to be 52 years old. That’s my age right now. Look at all the work he did for Jesus and his Church and his Precious Blood Community. Look at the convictions he had to start an apostolic community dedicated to the Precious Blood. Many people were jealous of him. They did not give him the time of day, but St. Gaspar remained meek, humble and persistent in God’s calling.

In today’s readings, we hear about the three magi. Author Raymond Arroyo writes that these three magi are not three kings from Asia, the Orient, or even Persia. Those were pious affections added to the magi story over time. Melchior, Balthazar and Gaspar are names that mean king in various tongues. Who were the magi? Arroyo theorizes that they were likely Zoroastrian priests, mathematicians, theologians, stargazers, magicians, interpreters of dreams and royal consults. These men were probably from the Arabian kingdom of Nabatea in the city of Petra.

These magi encountered king Herod in today’s Gospel. And the magi were wise enough not to return to King Herod after they saw the baby Jesus. Herod was very jealous of anyone who would be called king in his territory.

What are the jealousies in our life? What are we holding onto so tightly that we are not willing to make room for the Messiah? Many of us may not relate to King Herod but there are sins that shackle us and prevent us from experiencing the peace of the newborn king.

These magi were willing to leave their comfort in order to encounter the king of kings, Jesus. When they returned to their home, they were never the same. They were changed by the journey. They were changed for the better but they had to struggle. In their struggle they found the king of peace. God bless you all. 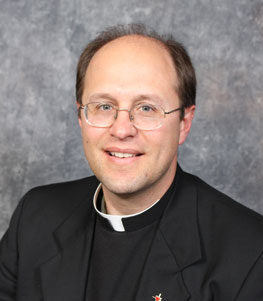 Fr. Tony Fortman, C.PP.S., is the pastor of the three parishes in the Catholic Communities of Northwest Dayton, Precious Blood, St. Paul and St. Rita.