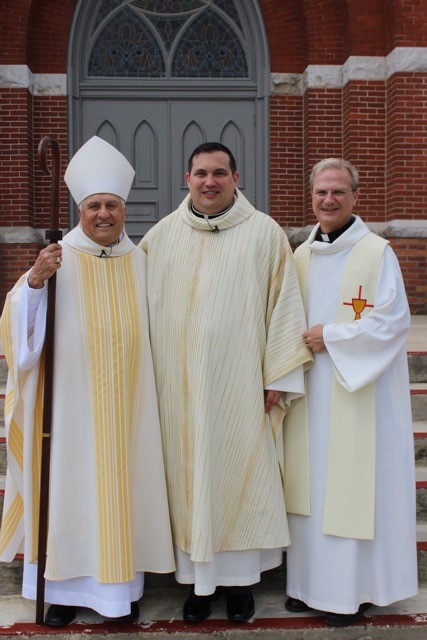 What drew you to the Missionaries of the Precious Blood?
I attended Saint Joseph’s College in Rensselaer, Indiana, and got to know the Missionaries there. They were my professors, chaplains, campus ministers, and even lived in the dorm with me. I got to see them “at work” in the college and “at home” in their local community at SJC. I got the chance to see if I “fit” as “one of them” and if they sort of “fit” me too.

What is your current assignment?
Graduate student at the Graduate Theological Union (GTU) in Berkeley, Calif., and lives in the Missionaries’ Sonnino Mission House.

What did you do before joining the Missionaries?
I entered formation with the Missionaries of the Precious Blood after I graduated from college. In college I majored in math and religion/philosophy and played college tennis. My greater accomplishment beyond that of the diplomas would be the sheer amount of procrastination I, somehow, got away with in college.

What do you enjoy doing in your spare time?
I enjoy going to the movies, reading, binge watching TV. I also like swimming and playing tennis.

Aside from St. Gaspar, what are some of your favorite Saints?
I went through RCIA while at Saint Joseph’s College, having been raised Baptist. At my confirmation, I took the name of St. Francis Xavier because he was a great missionary and a man who set out into the world and encountered diverse cultures in spreading the Gospel. I was honestly shocked when I found out St. Francis Xavier was the patron saint of the Missionaries of the Precious Blood. I am also deeply inspired by St. Kateri Tekakwitha, St. Pope John XXIII, and St. Katherine Drexel.

What is your favorite prayer?
I don’t know if I have a specific favorite prayer, but I do have a favorite quote on prayer. Meister Eckhart wrote on prayer, “If the only prayer you say in your entire life is, “Thank You,” it will be enough.” I like the summation of prayer into simple and pure gratitude.

What is your favorite:
Book: I regularly re-read Ordinary People and A Separate Peace, though I adore nearly all YA literature.
Food: Lamb & Beef Shwarma with Rice from Cedar’s or the Nile in Chicago is really good. The Spicy Potatoes with Tomato Alioli from Café Ba-Ba-Reeba is a close second.
Movie: Too many to name, but the top of the list probably has to be “The Lion King”.
Holiday: Christmas
TV Show: The West Wing

How much money would you earn on Jeopardy?
It is pure luck getting categories that fit you perfectly on any episode. Maybe $2,000-$4,000.

Would you rather go skydiving or snorkeling?
I have been snorkeling, but would like to try scuba diving next time. Skydiving would probably give me a heart attack as I have a bit of a fear of heights.