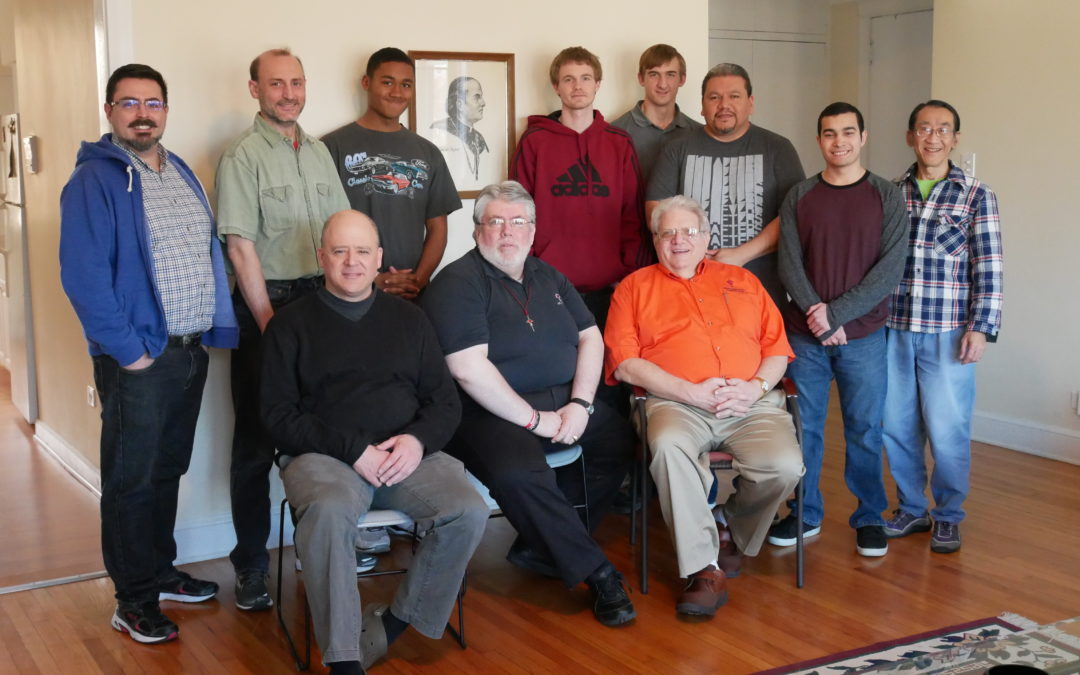 “This shared retreat saw five inquirers join me, Fr. Timothy Armbruster, C.PP.S., and the Drexel Square community, for a weekend of reflection on conversion, justice and the mercy of God,” he said.

“As we began to plan for the retreat, we made a conscious decision that rather than a retreat primarily focused on discernment and who we are as Missionaries of the Precious Blood, this retreat would provide a more Lenten focus for the men in discernment. We really tried to craft a weekend that aided them in their celebration of Lent, in a context where they could continue to explore who we are as a Congregation.”

Retreatants began by praying the Stations of the Cross then shared a simple supper of soup and bread. “We then spent some time getting to know each other, as four of the five retreatants were attending for the first time,” Fr. Steve said.

On Saturday morning, Sr. Donna Liette, C.PP.S., spoke to the retreatants about the mercy of God by way of some of the stories of the men and women at the Precious Blood Ministry of Reconciliation. “The conversation that followed echoed the richness of the stories that had been shared with us, and we recognized God at work in the midst of situations that most would see as insurmountable,” Fr. Steve said.

The afternoon session focused us on the task of forgiving others. Br. Juan Acuña, C.PP.S., reflected on what forgiveness is not and invited us to see forgiveness as an act that frees us from the burden of past hurts more than it frees the offender. The retreatants were given a couple of hours in the middle of the afternoon to reflect on all that they had heard so far. This was also a time for them to meet one on one with each other to discuss their discernment or to meet with one of the professed members.

Fr. Dennis Chriszt, C.PP.S., ended our day by reflecting on what is often the hardest form of forgiveness, forgiving ourselves.

“In his reflection and our conversation, we wrestled with the combination of hubris and guilt that can often get in the way of us forgiving ourselves, or even accepting God’s forgiveness. Even after the session officially ended, we continued the conversation,” Fr. Steve said.

On Sunday, the retreatants discussed discernment, next steps, formation, and community life.

“It was an exciting weekend,” Fr. Steve said. “The youngest of the inquirers was 18 and the oldest was 52. They were exposed to a great cross section of who we are as a Congregation, and they got to get to know us through our preaching and our sharing. We prayed together and shared enjoyable time together around the table. Which if any of these five men ever becomes a Missionary of the Precious Blood is up to God, but it was a good experience, and all of us, inquirers and professed alike, grew from the experience.”

Please keep these men in your prayers, that the Lord of the harvest will reveal to each of them the deepest desire of his heart, and that they will have the courage to respond to that call with generosity.