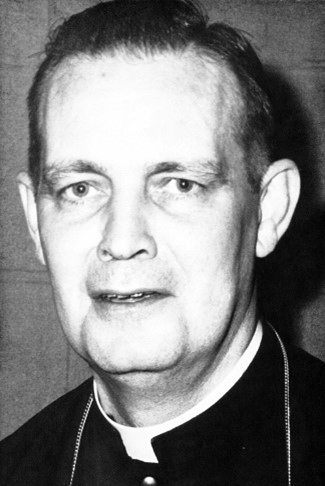 He started out in a deeply religious community at St. Michael Church in Kalida, founded in 1878, where he received a solid Catholic education in his early years. And he continued his education in all three of our major C.PP.S. institutions.

After ordination by Bishop Rehring, Fr. Siebeneck’s first assignment was associate pastor at St. Francis de Sales Church in Newark, Ohio, for two years. In 1946, he was appointed as a professor at Saint Joseph’s College for another two years. Having a great love for sacred Scripture, he was then asked to pursue further studies in Scripture in Fribourg, Switzerland, for one year, followed by a year in Rome. In September 1951, he was assigned to St. Charles Seminary as a Scripture professor.

In 1965, he began five years of service to the Community as the third councilor on the provincial board and provincial secretary. Realizing his love for history, he was appointed in 1969 as historian and archivist as well as superior of St. Charles Seminary in that year, responsibilities he held until July of 1975. At that time, he suffered a severe stroke from which he slowly recovered. In 1984, he was assigned as chaplain to the Sisters of the Precious Blood at Salem Heights in Dayton for seven years. In 1991, he retired to St. Charles. What a full life!

I got to know him as a true Scripture scholar—and I mean scholar! He was my prof in the 1950s at St. Mary’s Novitiate and at St. Charles Seminary. Since he did not drive (and never did), Fr. James Kelley, C.PP.S., the manager of Messenger Press at the time, would drive Fr. Bob to the novitiate two or three days a week to teach us novices the beauty and value of the Scriptures. He held our attention and was an impressive teacher. He had a Thomistic mind and memory; he used no notes and never distributed printed notes to our class. He was able to write on the chalkboard points one, two, three, plus a, b, c below as needed, just as St. Thomas Aquinas did.

When the class bell rang at the end of class, he would stop at once, even in the middle of a sentence, since he maintained that no one listened after the bell. But most interestingly of all, the next day he would pick up on that same sentence and complete it. Unparalleled and uncanny! He never missed a beat!

As a priest and a person, he was a quiet, humble and saintly man. Yes, he was a big, tall fellow—a genuine role model and Missionary, impressive in his cassock, cross and chain, which he always wore in the classroom. He was my second-best seminary prof, topped only by Fr. Herbert Linenberger, C.PP.S.