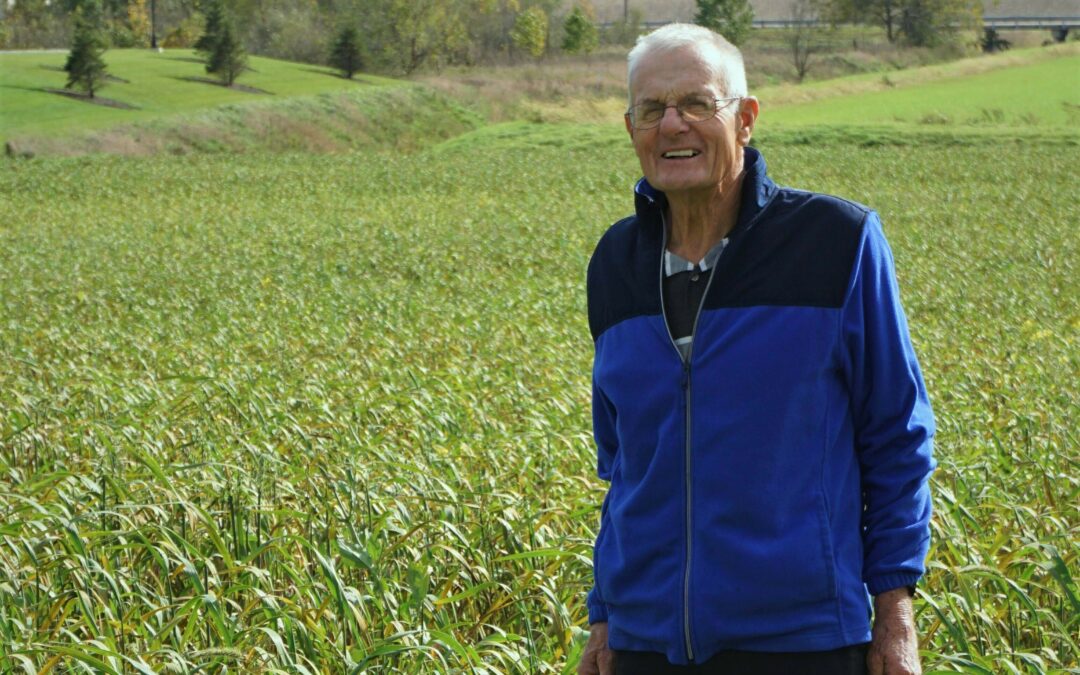 Brother Nick Renner, C.PP.S., was named the no-till educator of the year for 2021 by the Ohio No-Till Council at its annual conference on December 8 in Plain City, Ohio.

Brother Nick, who manages the Community’s farmland around St. Charles Center in Carthagena, Ohio, works with the farmers who rent the Missionaries’ land, requiring them to employ no-till methods of farming, including planting cover crops to save and nurture the topsoil.

“Brother Nick Renner has been in an unusual position to educate farmers. In his role as the manager of the farmland owned by the Missionaries of the Precious Blood, he has selected and worked with the tenant farmers to keep improving their no-till farming practices, including the use of cover crops,” said Randall Reeder, executive director of the Ohio No-Till Council. “As a result, crop yields are excellent, there is minimal soil erosion and runoff into nearby streams, and the soil is healthier than when he started.”

Brother Nick has also served as a speaker at various Ohio No-Till events and conferences, Reeder added. Also receiving an award at the conference was Jeff Duling, son of C.PP.S. Companions Bob and Cathy Duling of Ottawa, Ohio. Duling was honored as the state’s outstanding no-till farmer of the year.

Brother Nick was one of the first in the area to adopt the no-till method of farming, which attempts to plant and harvest crops with as little disruption as possible to the topsoil. In this way, the structures and life forms present in healthy soil are not destroyed by the plowing and cultivating that are a part of traditional farming methods.

“We thought years ago that you couldn’t grow a crop unless you moldboard-plowed it,” said Brother Nick, who grew up on a farm outside of Delphos, Ohio. With no-till methods, Brother Nick said he hopes to work with nature, encouraging healthy life forms like microbes and earthworms that are in the soil.

Brother Nick, who served 10 years on the board of the Mercer County Soil and Water Conservation District, still remembers his own no-till revelation, when he was still farming the Community land at St. Charles, then with Brother Don Fisher, C.PP.S.

It was a slow-building vision that came to him in the middle of the night. He was preparing for a trip to Rome with Fr. Ken Pleiman, C.PP.S. It was the mid 1970s, in April, and Brother Nick had to plow the field directly to the west of St. Charles Center before he could leave for Rome. He had a small window of good weather to get it done before his trip.

So he plowed all night. Up and down the rows he drove, up and down. “When it’s daytime, you can watch the traffic, the cars and trucks going by on the highway,” he said. “At night, it’s just you.”

He had a lot of time to think and pray, as the furrows of top soil rose up behind the plow. “They were turning to clay,” he said. Gradually it occurred to him that maybe there was a better way to farm, a way that would result in better soil and healthier crops.